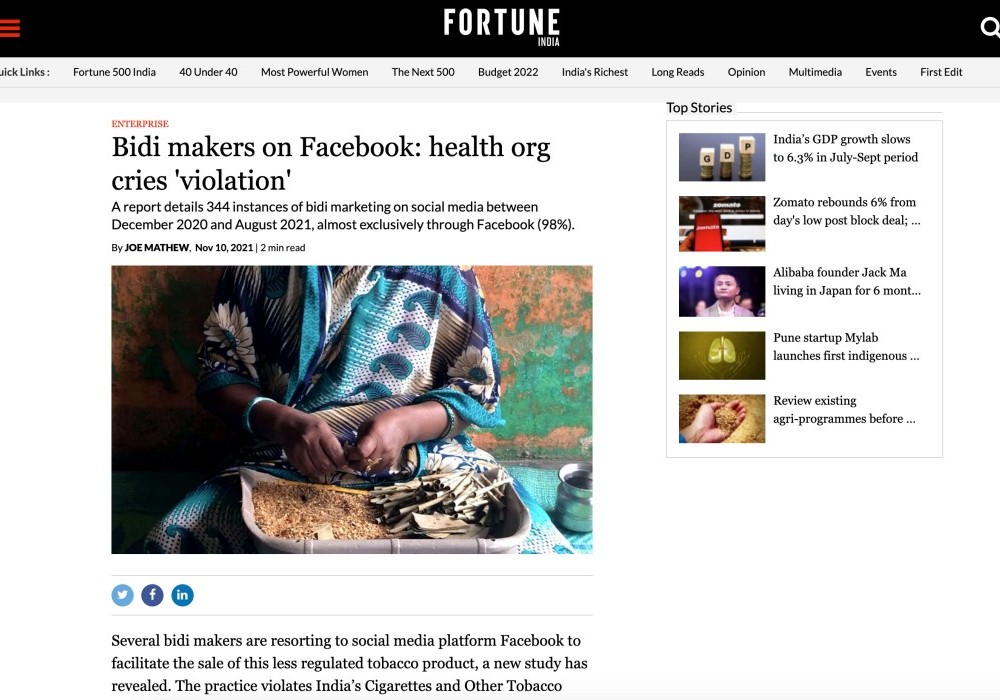 Several bidi makers are resorting to social media platform Facebook to facilitate the sale of this less regulated tobacco product, a new study has revealed. The practice violates India’s Cigarettes and Other Tobacco Products (Prohibition of Advertisement and Regulation of Trade and Commerce, Production, Supply and Distribution) Act 2003, says Vital Strategies, the global public health organisation which conducted the study.

Of the 267 million tobacco users in India, nearly 72 million adults smoke bidis, and nearly half (47%) smoked their first bidi before their 10th birthday. Easily accessible throughout the country and cheaper than cigarettes, eight times more bidis than cigarettes are sold in India, the report says.

The report, “Selling Death on Social Media: How Bidis Are Reaching Consumers Online”, details 344 instances of bidi marketing on social media between December 2020 and August 2021, almost exclusively through Facebook (98%). In 79% of instances, bidi products were being directly marketed with clear images of the product. This is compared to 9% of other smoking products and less than 1% of smokeless products, which are often marketed indirectly through more clandestine ways to circumvent current advertising regulations, the report says.

“The evidence is clear: tobacco marketing increases tobacco use. This evidence formed the basis for national and international regulations that ban or restrict the advertising of tobacco – most notably Article 13 of the World Health Organization Framework Convention on Tobacco Control (WHO FCTC). When the FCTC went into effect in 2005, however, social media use was in its infancy. As advertising regulations in traditional media have taken hold, the industry is migrating its marketing online where national regulations have been less clear. With the Ninth Session of the Conference of the Parties to the WHO FCTC taking place virtually this week, this report is a call to action for governments to surveil and address tobacco marketing on digital media. It is also a call for social media companies, Facebook, in particular, to close down tobacco marketing that facilitates sales of this deadly product,” says Nandita Murukutla, Vice President, Global Policy and Research, New York, Vital Strategies.

The report is based on data collected through Tobacco Enforcement and Reporting Movement, a digital media monitoring system launched by Vital Strategies in July 2021. It tracks tobacco marketing online through the systematic analysis of online news, articles, social media posts and conversations.