The Rise of E-cigarettes Exposes Young People to Harm 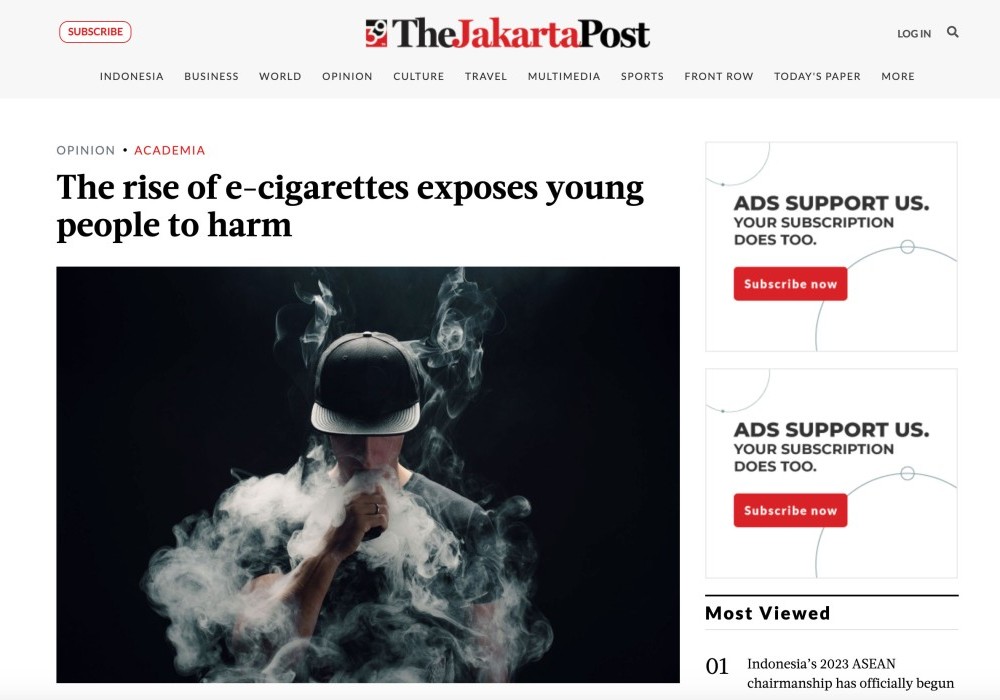 We’ll give you the good news first: Global rates of tobacco use are declining. The bad news? Electronic cigarettes (e-cigarettes or “vapes” as the industry likes to call them to appear innocuous, like vapor) are proliferating, and Indonesia is soon expected to be the largest market in Southeast Asia.

Despite industry marketing that suggests otherwise, e-cigarettes are far from harmless. Most e-cigarettes contain nicotine, which is addictive and affects brain development, and they have been found to contain nearly 2,000 unknown chemicals, as well as known carcinogens.

Also, despite the claim that using e-cigarettes can help people wean off of cigarettes, studies have shown that e-cigarette use can lead to people reverting back to smoking and that most e-cigarette users continue to smoke, with cardiovascular risks higher than if they were to do either alone.

These findings are especially concerning in Indonesia, where two-thirds of adult men smoke and one-fifth of teenagers aged 13-15 smoke cigarettes.

As e-cigarette companies have faced legal and regulatory problems in the United States — their largest market — they have set their sights on Asia. While some Asian countries have reacted by banning or heavily regulating e-cigarettes, Indonesia has yet to implement effective policies. This, paired with the country’s large smoking population, has made Indonesia an attractive entry point to the region for companies.

Tobacco giant Philip Morris International is opening a new production facility in West Java to sell its heated tobacco product. Heated tobacco products, like e-cigarettes, are part of a newer group of products that the tobacco industry is investing in to secure its future amid a shrinking cigarette market.

It has been proven time and time again that companies that sell e-cigarettes want their products in young people’s hands, to have “consumers for life”. E-cigarettes are notoriously marketed to appeal to younger audiences, and since these newer nicotine and tobacco products are rising in tandem with social media, companies can more easily reach their ideal consumer.
In some countries, marketing for tobacco products has been found to be rampant on platforms like Facebook and Instagram, despite community guidelines that regulate or ban their sale or promotion. This is concerning because young people who are exposed to e-cigarette marketing are more likely to use the products. And Indonesia has one of the world’s largest and most active populations of young social media users.

Several years ago, we began researching online tobacco marketing in Indonesia. In a 2021 study, we found that more than half of Indonesian adolescents aged 13 to 15 use social media platforms every day — and have seen tobacco marketing online. Over the past year, my team investigated further using data from the Tobacco Enforcement and Reporting Movement (TERM), a real-time digital media monitoring system we designed to identify and report digital tobacco marketing. We hoped to uncover the largely unknown digital marketing tactics of the fast-growing e-cigarette industry in Indonesia.

What we found is that e-cigarette brands are being actively marketed on social media in Indonesia. In fact, we observed twice as much marketing for e-cigarettes than for conventional tobacco products.

Because social media accounts are public, anyone of any age is exposed to their content. Most of the marketing we observed was on Instagram, which is popular among young Indonesians, especially for brand discovery. In fact, a poll found that 76 percent of Instagrammers in Indonesia have purchased a brand after discovering it on Instagram.

The marketing we observed was clearly poised to sell products: The majority of posts had clear images or videos of the product and many accounts and/or posts had links to online stores or to apps where people could buy products.

Products were positioned as glamorous, fun, high-tech lifestyle devices through posts that highlighted flavors (fruity, creamy) and colors, featured young influencers modeling products or reposted user-generated content including videos of so-called “vape tricks”, which involve blowing out large amounts of exhaled aerosol into shapes, such as clouds or rings.
Studies have found that “vape tricks” uniquely appeal to young people and have been identified as a reason for starting to use e-cigarettes.

We discovered a post that featured an influencer with more than 125,000 followers promoting GeekVape’s sponsorship of the French league champion Paris Saint-Germain. This partnership was the first between a soccer giant and an e-cigarette brand. We also discovered a post that promoted e-cigarettes as part of a glamorous daily lifestyle.
Most brands that we observed were major manufacturers marketing imported products that are distributed worldwide. Two brands we identified, GeekVape and SMOK, are heavily using influencers in their marketing (for example, we observed an Indonesian-based influencer who has a public profile with more than 324,000 followers and who works with both brands). One study found that e-cigarette brands often hire the same influencers, and Indonesia is one of the primary countries they source from.

It’s clear that Indonesia is facing a growing e-cigarette problem that must be monitored and which will only get worse if online marketing continues unfettered. However, when self-regulation by digital platforms is obviously falling short, governments must step in.

Indonesia can act now by strengthening its regulations on e-cigarettes, and particularly on digital e-cigarette marketing, by monitoring, reporting and addressing activities that promote e-cigarettes online. The health of our next generation depends on it.

***
Rachfiansyah is a communications officer and Hana Raskin is a science writer at Vital Strategies.